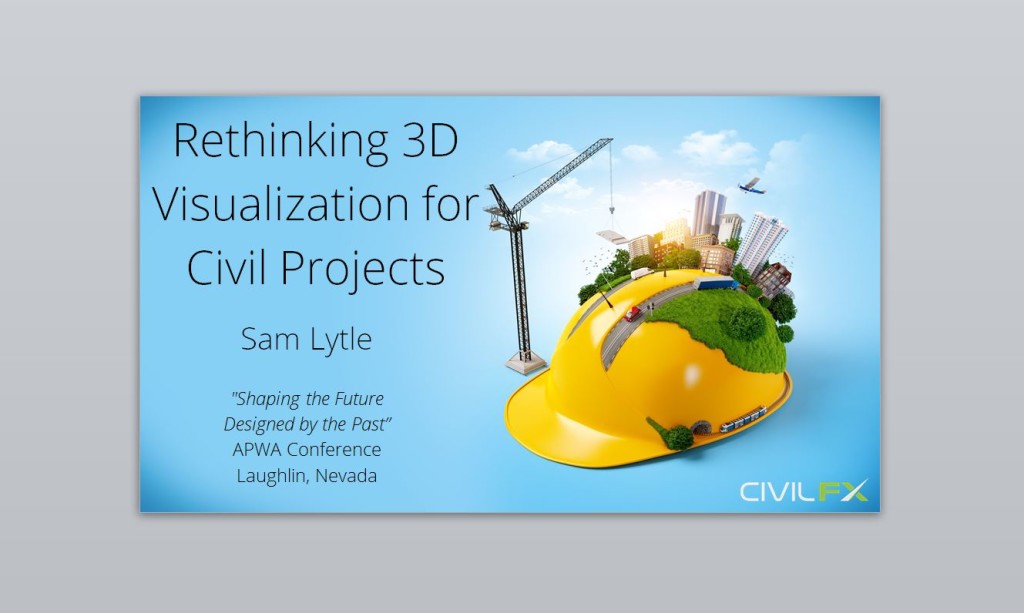 51 – Rethinking 3D Visualization for Civil and Infrastructure Projects (a Presentation)

The episode where I practice my conference presentation.

Slide 1- I’m very grateful for the opportunity to talk about 3D visualization with you today. Before I get started I just want to thank all of the conference organizers for putting on such a great show the past few days and for letting me play a small part in this historical conference.

Slide 2- A little about me. I was born and raised in Alamo, Nevada. I loved building things with legos and wanted to be an inventor and my dad said that in the real world inventors are engineers. I knew I wanted to be an engineer from and early age and never really looked back. I received a civil engineering degree from UNLV in 2010. After nearly 4 years with NDOT as a rotating engineer and in Roadway Design in Carson City, my family and I moved back to Las Vegas in 2013 where I spent another year with Kimley-Horn.

I first found a love for 3D visualization early in my education at UNLV and would spend most of my class projects focusing on the presentation and not so much on the math and engineering. It wasn’t until I was at NDOT in 2011, however, that I realized that 3D visualization could potentially be a career path and when I decided that someday I would start my own visualization firm. In the summer of 2014 I received my engineering license and saw the opportunity to finally venture out on my own doing visualization and Civil FX was born. For nearly a year I have been working full-time building this small firm and offering services in 3D visualization for large and small infrastructure projects.

When the Panther football team won state a few months ago it was their 81st straight win, the longest in the country for any football team. This also includes 7 straight state championships. I’ve been to many of these games and most of them are over within the first few minutes of the game. Along with this incredible winning has come some national press.

Slide 5- Oh, and this was also my national TV debut…

Slide 6- While Panther football has been incredibly dominant most of the past decade, it actually wasn’t always this way. For many years Panther football started your freshmen year, consisted of endless running and ruthless practices and the coaches always trying new play sets. While there were some good teams, the football team was never really dominant. When I was a senior in high school in 2001 we won state football for the first time in 13 years.

Slide 7- Not long after we won state in 2001, the coaches started to completely re-think the entire football program. They decided to start the kids playing football much younger with the entire coaching staff involved in the development of the little kid teams all the way up to high school. Instead of endless running they focused on being in shape and being healthy and used all of that previous running time to practice plays. The coaches focused less on winning and more on building good kids and a great program.

It took a while, but the results speak for themselves. First it was winning championships every other year but as the high school kids eventually were a product of the complete football program you had kids playing football that had played with the same coaches, players and plays for 10 years.

Slide 8- Okay, so what does all this have to do with 3D visualization? Before we talk about how rethinking 3D visualization, let’s talk about what it is. I like this definition “Visually representing technical information to communicate design intent using 3D modeling” but it’s kind of long. I usually explain 3D visualization simply as communication. It is the process of taking something that is typically complex and communicating it visually.

Slide 9- …and why do we need it? Traditionally the most common applications for 3D visualization in infrastructure projects have been public outreach and proposals. There are many reasons for 3D visualization, especially as the cost goes down as we will discuss later in the presentation. Just a few of those reasons include planning, public outreach, design phase, legal, construction, education and research.

Slide 10- So why should we even be rethinking 3D visualization? I mean, it has been done for years and some of it is really good. Well, I have had to rethink 3D visualization for two reasons. The first is personal necessity. I felt there was a need for a 3D visualization studio in Nevada and even had a few clients lined up when I started. The problem, however, was that I couldn’t afford to invest in the hardware, software and trained staff traditionally used for 3D visualization just starting out. I had to rethink the way 3D visualization was done if I wanted to do it on a startup budget.

The second reason is that the rules have changed. The industry has evolved in the past few years in a way that the barriers to entry have dropped significantly. We will talk more about this in a little bit.

Slide 11- Let’s talk about how 3D visualization has been in our industry historically. Typically it has been only reserved for the largest jobs. Also, it was either expensive or low quality… but not both. As far as sharing the model the two options were usually a wireframe view or a long render time for the final video. Communications were also very common either between engineers and artists or even project managers and those from other countries. The software used was expensive and even more difficult to use making it nearly impossible for engineers to do their own visualization. If you wanted help in learning how to do visualization on your own there was very little information available online and not much of a community to support you in your efforts. And finally, projects were often only partially modeled based on camera views which I call ‘corridor modeling’. This made it difficult for revisions if the client wanted the project rendered from a different direction.

Slide 12- Fortunately, the rules of 3D have been changing which present incredible benefits to both 3D visualization contractors and clients. Software is now more powerful, more accessible, there are more tools specifically designed for civil visualization. And, perhaps more importantly, 3D has never been more affordable.

Slide 13- Just to show specific examples of how 3D visualization tools are more available, these are a few of the recent software changes. Within the last year or two Autodesk and Adobe- perhaps the two most important software companies in visualization- have started moving to subscription models. Instead of spending many thousands on software just to get started, you can now pay a few hundred dollars per month and have all of the software you need for the best visualization possible.  Google Earth Pro which is extremely useful for pulling high resolution imagery among other uses just announced that it would be free for no apparent reason. Also, just two months ago all of the major video game engines announced that they would be changing pricing models to a revenue sharing model that just happened to make visualization completely free like this tweet from Unreal Engine.

Slide 14- While video game engines were not extensively used for high quality visualization in years past because the quality just wasn’t that great, this software has improved considerably to the point where the lines between real-time and rendered are being blurred. This is an example from Unreal Engine 4… completely in real time.

While the technical nature of the software still creates a barrier to entry, that video you just saw could be theoretically be created, commercially, with zero software costs. This is a tremendous shift in the technology and just one reason why I believe that real-time visualization is the future of the industry.

Slide 15- So let’s talk a little more about what this new visualization looks like. The first thing is that I hope new visualization will include a much more open and robust community. To help this I write blog posts every week on the Civil FX website, have an online radio show called Beyond CAD where I talk about how I do create these animations and have a LinkedIn group that collects like minded individuals so we can share and learn together. I have connected with many others in the industry that feel the same way and are involved in similar efforts.

New visualization is also more focused on modeling the whole project first and then figuring out the camera angles later which makes real-time navigation more possible for better communication and coordination. Because these real time engines are smarter about what they display, rendering is considerably faster. We use an architectural engine called Lumion and I most of our renders take less than a day on a single laptop. Many can be done overnight.

All of this leads to more affordable visuals while still being profitable for the artists involved in the creation. Less of the money is going to software and hardware companies and staying in our communities.

And even after all of these changes the quality and accuracy are similar if not better than the expensive visualization of years past.

Slide 17- The bottom line is that this will lead to more teams performing more visualization for more projects.

Slide 18- I’m very excited about where this industry is going but there are still challenges we face. The software used for visualization is still often with a high learning curve which requires specific training. And while these real-time engines offer incredible benefits, you can’t typically use them on standard CAD machines as they require robust graphics cards and a lot of RAM. There are also technical constraints with some real-time engines that limit the sizes of models that can be created.

And finally, perhaps the biggest challenge is skepticism. I’m proud to say that virtually all of the clients I have worked with both with Civil FX and previously have expressed interest in using visualization again in the future. However, there are still many in the engineering and construction industries that still are skeptical about spending any money on graphics and are completely satisfied with aerial exhibits or CAD pdfs.

Slide 19- That said, it is simply amazing how this industry is evolving. This is a short video I created in just a couple of days for only a few thousand dollars- something that was impossible just a few years ago.

Slide 20- I believe that we are in just the beginning stages of using accurate visuals to communicate infrastructure projects. I look to the day when every RFP requires visualization and every project from system to system interchanges down to the cul de sac on the corner use visualization early and often. But to get there we all have to rethink visualization.