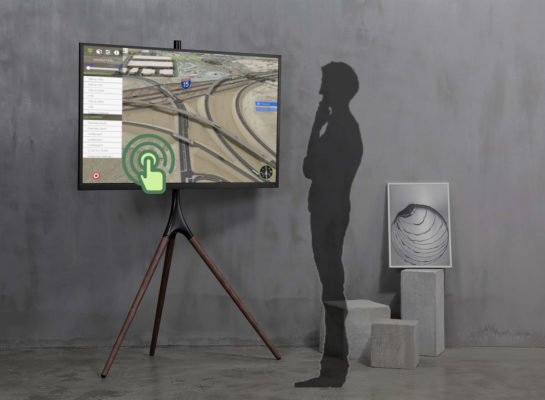 Our current ‘kiosk’ setup is about half the size and weight of the previous iteration. It’s a 55” 4k touch screen with a stand, but it’s a lighter TV which allows the use of a foldable tripod stand. We also now have a compact gaming PC vs the less compact previous version.

I’ve lugged around a lot of our kiosks over the past 3 years. It is the best way we have found to demonstrate the interactive visualization we develop and as such, this kiosk typically becomes the focal point of the many public meetings and conferences that I attend. My pickup truck is just big enough to fit the large TV in the box along with the stand (both the sturdy previous version and the current tripod version) along with the necessary carts, straps, cables and other equipment necessary for this setup.

In Las Vegas, loading and loading isn’t too much a problem- most buildings have ample parking near entrances. I’ve gotten pretty good at unloading, unpacking setting up and reversing the process when complete, all by myself. It takes a few trips to and from the pickup, but I can do it alone with little issue. Here is how it works at public meetings.

When I was invited to present in Los Angeles for a few engineering firms, I jumped at the chance to make connections in a new market and show how effective our interactive visualization is on our big kiosk. What I didn’t understand, however, was that the logistics of downtown LA are vastly different from that of non-downtown Las Vegas. I quickly learned that parking garages, security guards and elevators add a significant amount of friction to my process of delivering and setting up this kiosk. By the time I arrived at the first meeting, I was almost 30 minutes late and covered in sweat.

This wasn’t the first time that I had to seriously consider how we can make interactive visualization more mobile and available to more individuals. We’ve been working on this problem for years now and have found a few alternatives with notable drawbacks. But perhaps more importantly, the technology is improving fast enough that the ultimate solution is close enough that it can be defined.

Alternative 1- 2 in 1 Device with GPU

The essential elements of this type of kiosk consist of two parts- a Windows device with dedicated graphics card and a touch screen. I’ve watched the 2 in 1 market closely over the past couple of years and the best one to come out has been the Surface Book 2 as it has a GTX 1060 graphics card and a very high-resolution touch screen. The GPU is a little slow for our more complicated projects, the screen is too small for public meetings and conferences and the entry level configuration is more than $2,000 but it is an excellent device for one on one presentations or connected to a larger screen. This has been my daily driver for over a year and we’ve bought a few of these for project managers on projects that we’ve developed interactive visualization.

So while the Surface Book 2 and similar devices make a compact kiosk in a pinch, it is too expensive, too small and too slow to be a good replacement to our big kiosk for group settings or to get interactive visualization to the masses. We’ve also purchased and tested the cheaper Dell XPS 15 2 in 1 (way too slow) and the much more expensive Razer Pro with GTX 1080 and touch screen (better performance but screen doesn’t flip around). (Note: if you know of a 2 in 1 with dedicated GPU that I’ve missed, please let me know!)

At one point I thought developing for mobile was where we needed to go. After all, creating an app that anyone can download and use on any mobile device would be the ultimate way to get interactive versions of projects into as many hands as possible. What we found, however, was that optimizing for PC is hard enough and optimizing for mobile one major projects with hundreds or thousands of cars, trees and buildings is a monumental task. Even then, only the fastest devices will run the application optimally and the battery life will be slow and the device will often heat up quickly. Remember that we are typically building complicated 3D environments with millions of polygons and thousands of draw calls. Our largest project had over 10,000 vehicles running at the same time!

While building for mobile could work well for small projects, most of our projects are significant in size and don’t have enough budget for optimization. Instead we have found that the cost of optimization would significantly exceed the cost of buying a laptop with a GPU, even if that device costs more than $3,000.

I look forward to the software and hardware improving to the point where building for mobile is a more realistic solution to more of the projects we work on as I think getting this type of project visualization into the hands of the public would be a very effective outreach strategy.

Cloud gaming is all the rage with the recent announcement of Stadia by Google. The thought of high resolution, smooth frame rate gaming on any device is enticing for many reasons including gaming on the go on any device and potentially avoiding the cost of dedicated gaming hardware. Since the processing is all done remotely and streamed to the user, the type of device almost doesn’t matter.

Cloud GPUs aren’t only useful for gaming, however. Over the past year we’ve been looking at the option of utilizing these services for our graphically intense interactive visualization. This would eliminate the need for a 2 in 1 device for project managers but instead give them the ability to log onto any device to use the application. We’ve tested it and it seems promising, but there are still some drawbacks.

The first is that the technology isn’t great at this point. The service we used basically allowed you to log into remote PC with a GPU. Technically this is the solution we are looking for but in practice it is very clunky. After going to the link and logging in, you are presented with a desktop where you still have to find and launch the application. Perhaps this isn’t a big deal for you or I, but I promise this is the last thing a project manager wants to do when presenting into dozens or even hundreds of people. There are just too many steps.

Oh, and when you finally get logged in our options for resolution are limited too. Maybe some don’t know the difference between 1080p and 4k, but when you are up close to a big screen, it makes quite the difference.

The final and perhaps most daunting drawback to the cloud GPU option is the fact that an internet connection is required. This is fine in most situations, but if you have a stakeholder meeting and you find out you don’t have Wi-Fi at their location, you are going to be out of luck. The same is true of field visits to the project site or a host of other scenarios with limited or no internet connection. Perhaps you could get a 4g router from a wireless provider, but that is added costs and hardware that leads you back to the fact that maybe the 2 in 1 option is the best after all.

This is perhaps my favorite solution and one that we’ve invested quite a bit of research and testing into over the past few months. The ability to send a link to anyone including project managers, project team members, politicians or the general public to access an interactive application is an ideal solution and even better than a mobile application. This can be a stand alone link easy enough to remember or the application can be embedded directly into the project website.

Done right, this can also work on mobile devices or tablet PCs (ie Surface Pro) with touch capabilities to utilize the multi-touch functionality. This option gets the visualization into the most hands possible.

But as every other alternative, there are limiting factors in play. The most important is that browser-based applications need to be as much- or even more- optimized than mobile devices. Right now we have only found success with very small projects including a single intersection or interactive typical sections.

The other downside is potentially long load times. This can be due to large file sizes (more optimization) or slow internet connections. The applications can’t just start streaming like a video (or cloud GPU!) but have to be completely downloaded before launching. This isn’t ideal for the general public with short attention spans.

So while browser-based applications might have the most potential, the ultimate potential won’t be realized until further software and hardware improvements.

For group settings, none of the options discussed have the effectiveness of standing in front of a big touch screen. While the issues of lugging around a heavy TV, stand and PC have already been documented, continuing to reduce the overall size, weight and transportability might be possible. Microsoft has already announced the Surface Hub 2 which improves the 4K touch screen and stand problem. You’d still need a gaming PC or laptop, but we are getting closer.

The two 4K TVs we’ve purchased have been 55” partially because the large size is perfect for groups but also because anything smaller isn’t available in 4K. Again, you could get by with 1080p, especially in smaller size, but it wouldn’t be ideal.

But this does lead me to my dream kiosk- a 40-43” 4K touch TV with collapsible tripod stand and compact gaming PC or laptop. The TV would have a custom rack on the back of it to hold the PC or laptop to keep the cables clutter free. Perhaps more importantly, we would have a padded custom case that would fit the TV, stand and PC/laptop all in one with wheels and handles. This way the entire kiosk could be shipped anywhere in the world instead of being limited by how far I feel I can drive my pickup.

If we look even further into the future, perhaps there could be a Surface Hub device that has the PC/GPU built in (or our application is so optimized the GPU isn’t necessary) and the entire device is light enough that you can mount on a wall. Now we are talking.

Or, while we are dreaming, perhaps a 4K short throw projector could be utilized with magic leap or Kinect type motion detection for multi-touch navigation.

It’s hard to know what the future will look like. Perhaps interactive visualization will evolve quicker than the hardware and software necessary to realize these alternatives. Maybe new devices (folding screens!) will come to market that will completely change the direction of this conversation.

But as long as I’m dripping in sweat loading, unloading and setting up hardware that weighs in the hundreds of pounds, you can bet I’ll be dreaming about what the future could possibly be.