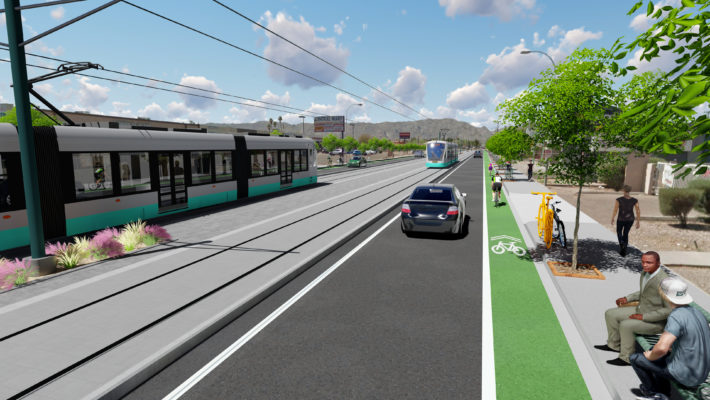 The 3 Levels of 3D Visualization

When you first enter the world of visualization it may seem like there are endless ways to visualize or communicate a project. While this might be true in some ways, over time we have learned that nearly all of the visualization requests we get can be categorized into three distinct categories. Because each category builds on the previous, we call these the three levels of visualization.

These visuals simply include taking photos of the project site, modeling the proposed improvements in 3D and rendering with the same view as the photos and then blending the images together in photo editing software in what will hopefully be a somewhat seamless representation of what the project will look like.

These are the fastest and most affordable because we don’t have to worry about modeling or texturing existing elements (because they show up in the photo) but these composited renders also tend to be incredibly accurate and realistic.

However, Level 1 renders are also the least flexible as it is difficult to change the direction, time of day or other aspects of the render later on. They also only show very specific portions of the project rather than most of the project scope like Level 2 and 3 visuals can.

If you’ve ever seen a 3D fly-through of a proposed project, you’ve seen a Level 2 animation. This process involves identifying with the client what story you want to tell, determining camera paths and then modeling what the cameras will see for the final render.

create existing and proposed elements in 3D, but it also offers a much more dynamic representation of the project than composited renders can. Sometimes these animations simply fly over a static project while other times they can show a driver’s view of a new intersection or even construction phasing of a complicated project.

Because the project and existing elements are already modeled in 3D, it is typically very easy to produce static renders and (Level 1) composited renders to additionally use for project communication.

Note that a limiting factor of Level 2 animations can sometimes be the time required for our computers or render farms to render out the video file which can be tricky with multiple drafts.

As real-time visualization technology has improved and we have developed new workflows to turn design data into realistic 3D representations of projects, we have learned that interactive visualization is the ultimate design tool. Project Neon was our first foray into this technology, and we were able to turn this $1 Billion+ project into an interactive, accurate and attractive communication tool. As our model progressed we were able to add menus for touch screens, a virtual reality helicopter tour and even a driving experience.

Because we build our Level 3 projects as completely as possible, the possibilities are nearly endless on what we can do with this virtual model. In upcoming projects we are increasing the level of optimization so that they can be fully experienced with a touch  screen on a phone or tablet.

While Level 3 visualization can cost more than the other types because we involve developers, optimization, research and whole world modeling (ie ignoring where the cameras will be and modeling everything as completely as possible), Level 3 visual experiences are nearly infinitely flexible and can also be used to produce Level 2 and 1 graphics. For example, with our Project Neon virtual model we can produce very high image renders in seconds and 4k video renders in hours instead of days or weeks because we use real-time rendering technology.

Our clients have reported that these visual experiences are the ultimate way to communicate a project at a project office or public meeting and the Nevada Department of Transportation (owner for Project Neon) has reported that they will soon be requiring interactive (ie Level 3) visualization for all major projects moving forward.

We love producing Level 1 and 2 visuals for our clients and their projects in a way that meets or exceeds industry standards, but our passion and how we are building our team is around Level 3 visual experiences. We feel that this is what sets Civil FX apart from the competition.

While these three levels cover most visualization requests and fit the many types of potential graphics for project visualization into a finite package, there are some requests that may not including:

While we may field these requests depending on the project, budget and our current work load, it is our goal to focus as much as possible on visualization that fall within the three levels.

This categorization has helped us in two ways. First, it helps us communicate to our clients what they may want for the budget available for the project. Instead of saying ‘we can make any sort of graphic you want’ when they might not be familiar with the process at all, we can instead say ‘these are the three levels of service we typically deliver’, which dramatically reduces the scoping time and potentially eliminates unnecessary confusion.

The second way the three levels helps us is internally with our own team of artists and engineers. We can have standardized processes for scoping, estimating and delivering each level. While there will always be a level of art in what we do, standard operating procedures help us stay more efficient and more affordable for our clients.

If you would like a custom quote on any of the services we provide, you can contact us here.